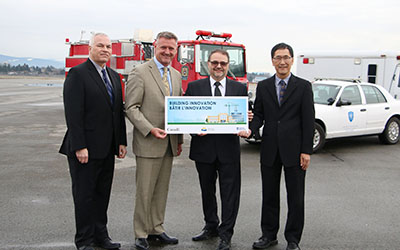 PITT MEADOWS - Canadians will be better equipped for the well-paying middle-class jobs of today and tomorrow as a result of a $1.9 million investment in two new capital projects at the Justice Institute of British Columbia (JIBC), including a modular learning facility for students taking specialized driving courses.

The Government of Canada's Innovation Agenda aims to make this country a global centre for innovation - one that creates jobs, drives growth across all industries and improves the lives of all Canadians. This investment is a prime example of that vision in action.

The funding will support two capital projects at JIBC. The first is the design and construction of a modular learning facility at the Driver Education Centre in Pitt Meadows, which will provide students with a weather-protected learning space. The new design will support the delivery of specialized driving courses, primarily for police recruit and sheriff training.

The second project is the replacement of the 21-year-old roof on three buildings at the main JIBC campus in New Westminster, which will help reduce winter heat loss, save on summer cooling and reduce the carbon footprint at the institution.

Founded in 1978, JIBC offers a range of public safety and justice, paramedical, conflict resolution and emergency management programs leading to certificates, diplomas and bachelor's degrees. Each year, more than 25,000 students study at one of the six JIBC campuses in B.C. through online distance education or at more than 90 communities in B.C., across Canada and around the world.

The funding from the Government of Canada is being allocated through the Post-Secondary Institutions Strategic Investment Fund, which enhances and modernizes research facilities on Canadian campuses and improves the environmental sustainability of these facilities. 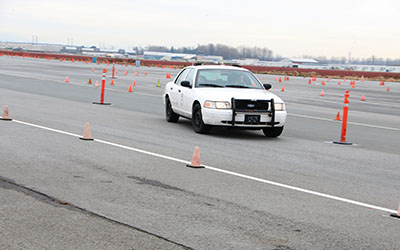 Member of Parliament Dan Ruimy on behalf of Navdeep Bains, Minister of Innovation, Science and Economic Development -
"The Government of Canada is proud to support universities, colleges and institutes throughout British Columbia that transform communities like ours into hubs for innovation and research. This announcement recognizes that Canada's place on the world stage for innovation starts at the heart of communities like Pitt Meadows."

Doug Bing, MLA for Maple Ridge-Pitt Meadows on behalf of Andrew Wilkinson, Minister of Advanced Education - "Investing in new facilities for the Driver Education Centre at the Justice Institute of British Columbia will improve student learning experiences. The B.C. government is setting JIBC graduates on the path to successful careers in Pitt Meadows, Maple Ridge and communities throughout the province."

Michel Tarko, JIBC president and CEO -
"This investment partnership with the Government of Canada and the Province of British Columbia will benefit JIBC students, faculty and staff. These investments will improve access to specialized driving courses and save money on operating costs while reducing our carbon footprint."

Steve Schnitzer, JIBC police academy director -
"Our teaching and learning philosophy is rooted in experiential training where group discussions and the use of case studies are integral to our learning process and outcomes. We hold classes in almost all weather conditions and currently have to brief and debrief students with little shelter. This funding will help improve the quality of our education programming and training by providing modern and comfortable facilities to facilitate discussions with recruits before and after driving the course."

Warryck Dunbar, Law Enforcement Studies Diploma student -
"The hands on training that JIBC provides its students at the driving track impart practical knowledge and skill sets that will inevitably ensure our future success as we pursue our vocations in law enforcement."

The Government of Canada's Innovation Agenda is designed to ensure Canada is globally competitive in promoting research, translating ideas into new products and services, accelerating business growth and propelling entrepreneurs from the start-up phase to international success.