Canadian Armed Forces Master Corporal Brent Nolasco is one of four recipients to be honoured at the 12th annual Justice Institute of British Columbia (JIBC) Foundation Awards for Justice and Public Safety Gala, presented by Scotiabank, being held at the Hyatt Regency Vancouver on November 28.

Each year, the Awards Gala recognizes and acknowledges individuals and organizations that have made outstanding contributions in the areas of justice, public safety and community leadership. 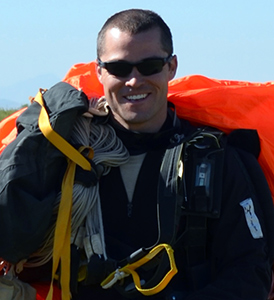 This year, MCpl Nolasco will receive The JIBC Foundation Heroes & Rescue Award for demonstrating courage in carrying out a difficult or heroic rescue to save another person’s life.

MCpl Nolasco was in training to become a Search and Rescue Technician at the Canadian Forces School of Search and Rescue in Comox, BC, when he found himself responding to a real-life rescue situation in December 2012. It was during the practical portion of the medical phase of his training that a call came in about a car accident in Victoria where a vehicle had flipped over and was partially submerged in a water-filled embankment; the 17-year-old female passenger was unconscious and trapped.

Upon arrival at the scene, police and firefighters were attempting to turn the vehicle over but to no avail. Seeing that the passenger was still restrained in her seat belt, MCpl Nolasco gave his knife to a police officer so he could cut the strap. Even after the shoulder strap was cut, the female passenger remained trapped. MCpl Nolasco quickly recognized that the young woman was still being restrained by the lap belt. Without hesitation, he retrieved his knife, entered the frigid water, cut the lap belt and freed the passenger. He then pulled her out of the wreckage, and with the help of the other emergency responders, carried her up the embankment to the ambulance where he performed chest compressions. While en route to hospital, the young woman regained a normal heart rhythm.

“Master Corporal Brent Nolasco is a true hero in every sense of the word,” said John Chesman, JIBC Foundation Chair. “His bravery and selfless actions, while under such extreme stress, helped to save the life of another human being. Master Corporal Nolasco is a testament to the outstanding calibre of the Search and Rescue Technicians serving the Canadian Armed Forces. We are proud to present him with this award."

MCpl Nolasco will be attending the Awards Gala in Vancouver to accept his award. He is currently based at Canadian Forces Base, Trenton.

The other 2013 award honourees are:

For more information about the Awards Gala and to purchase tickets, visit www.jibc.ca/gala or call 604.685.4888.

About The JIBC Foundation

Since 1994, The JIBC Foundation has supported the Justice Institute of British Columbia by raising funds for student scholarships and bursaries, applied research opportunities and equipment and other tools for learning. By inspiring giving through various fundraising initiatives, the Foundation ensures that JIBC continues to maintain its worldwide reputation for excellence and innovation as Canada’s leading public safety educator.