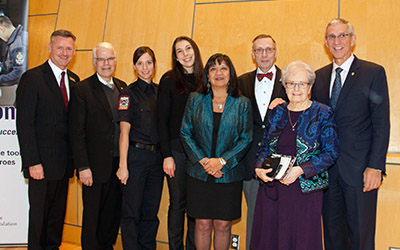 A program building first responder capacity in Aboriginal communities; new technologies and equipment being used by JIBC law enforcement and paramedic students; awards and bursaries helping students realize their goals of a career in public safety.

These are just a few examples how donors have contributed to building safer communities and a more just society, which were showcased at this year’s donor appreciation event hosted by The Justice Institute of British Columbia Foundation (The JIBC Foundation).

Bernie Magnan, Chair of The JIBC Foundation, said at the event, “For me, personally, it is very rewarding to experience the effect of our work and see how it impacts others. Tonight is our opportunity to say thank you to all of you: our donors, supporters, advocates and ambassadors. You have made a significant impact on the lives of our students in so many ways.” 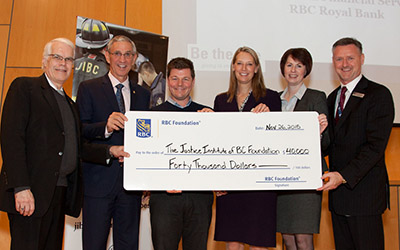 Tim Manning, RBC’s Regional Vice-President, Commercial Financial Services, was in attendance and presented a $40,000 cheque to The JIBC Foundation to support JIBC’s Fundamentals of Emergency Medical Responder (FEMR) program for a third consecutive year. Supported by RBC since the pilot, the FEMR program was designed to provide a cost-effective and efficient way to increase the standard of care and first responder capabilities in rural and remote Aboriginal communities in B.C.

“We are very proud to support this vital project by providing tools and resources for tomorrow’s heroes,” he said. “These students are truly making a difference in their communities, and actually saving lives. For us, that’s why giving matters.” 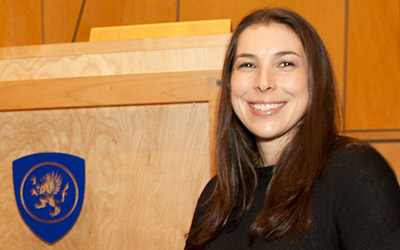 Each year, hundreds of students receive financial support from awards and bursaries established by donors. Among the students expressing their appreciation to JIBC’s donors was Shauntelle Nichols, a graduate of JIBC’s Law Enforcement Studies Diploma, who has benefited from student bursaries, including the Minerva Foundation Award for Aboriginal Women.

“To attend JIBC, I quit my job and I moved my two-year-old daughter and myself away from every support I knew. I sold everything and had little,” she said. “But I knew what I wanted; I wanted to work hard and give my all. I had no idea how, financially, I was going to make it through the law enforcement diploma, but I knew I had to follow my dream. The financial help and support from donors allowed me to focus on my studies and perform to the best of my abilities. It would be impossible for me to be where I am today without donors believing in me. Thank you again to donors for the support and opportunity to keep hope alive.”

While JIBC donors establish student awards and bursaries for various reasons, very often, the long-term impact of an award for students can be immeasurable. At the event, Beverley Carl, shared her experience meeting with Matt Brown, the first recipient of the Beverley and John Carl Award, which was established as the couple’s way to show appreciation to the paramedics that saved her life a few years ago.

“Matt said to me, which made it all worthwhile, ‘By receiving your award, you’ve validated what I want to do.’  We set the criteria for the award, and he met the criteria, but now he also feels he’s made the right choice. That’s the kind of thing we are hoping to reinforce. That means so much to me, to see the value of the award is more than just financial.”

At the event, The JIBC Foundation also launched its holiday Help-A-Hero Campaign. Donations made to the campaign will directly impact the lives of JIBC students through JIBC’s student bursary program. Donors who contribute to the campaign will be recognized with an ornament that includes their name, which will be displayed on The JIBC Foundation holiday tree at the New Westminster Campus.

To donate, visit jibc.ca/donate. Thank you for being the one giving to student success.

We gratefully acknowledge and give thanks to the sponsors of the 2015 Donor Appreciation Event: Corporate Classics Caterers, Gordon Food Service, Inn at the Quay, Safeway (Royal Square Mall, New Westminster), Starbucks.

Since 1993, The Justice Institute of British Columbia Foundation (The JIBC Foundation) has worked on behalf of JIBC to raise funds for scholarships and bursaries, applied research, equipment and other tools that impact student success. The Foundation is the recipient and steward of charitable donations and builds meaningful relationships with communities to support Canada’s leading public safety educator.

JIBC staff, faculty and community give for student success