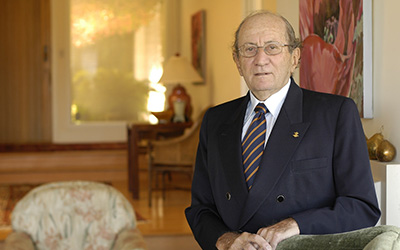 “And the rest is legal history!” It’s a truism that fittingly applies to the career of Marvin R.V. Storrow, QC, LLD. As a senior litigation counsel engaged in both civil and criminal law, Storrow has made close to 40 appearances before the Supreme Court of Canada and steered the course of legal history in this country.

“I consider it an honour and a privilege to practice law in Canada,” states Storrow. “The legal profession in the country has the ability and obligation to protect, and when possible, improve our legal system.”

While his expertise spans many areas, including tax, commercial, sports, environmental and criminal laws, Storrow has been a trailblazer in Canadian First Nations law. He was the lead counsel on three ground-breaking cases involving constitutional rights and Aboriginal land titles that have been ranked by Canadian legal scholars as being among the 15 most important in Canadian legal history. He has had trials in the Northwest Territories and every province except Prince Edward Island. Storrow’s dedication to the justice field has been recognized by notable Canadian law-related organizations including the Canadian Bar Association, Law Society of British Columbia, Allard Law Alumni Association, and Lexpert.

Storrow’s occupation compels him to volunteer. “Lawyers have a duty to give back to the public that enables us to practice our profession,” expresses Storrow.

Storrow’s distinguished career has led him down various paths – from articling in 1962 at Cowan, Twining & Collins, to a stint as Prosecutor with the City of Vancouver, and as a partner at Dumoulin, Storrow & Company. In 1971, Storrow became senior counsel at the Department of Justice in Ottawa, then in 1975 he returned to Vancouver as a partner with Davis & Company. The renowned lawyer is now a partner at Blake, Cassels & Graydon LLP (Blakes), which he joined in 1988.

Throughout his career, he has been actively engaged in pro-bono work. For the wider community, Storrow has been a volunteer on several boards, including West Coast Environmental Law; the BC Sports Hall of Fame and Museum; Greenpeace; the Aboriginal Law Student Scholarship Trust; the BC Epilepsy Society; and The Justice Institute of British Columbia Foundation – where he is tied with founding Chair Peter W. Webster for being the longest serving director, with over 16 years of service.

“In my opinion the Justice Institute of British Columbia (JIBC) is one of the most valuable institutions in the province,” explains Storrow. He continues to be a true ambassador for giving back, especially to JIBC. Together with his wife Colette, Storrow has a named bursary at JIBC to support the success of Aboriginal students.

On November 15, 2018, Marvin Storrow, QC, LLD, will receive the 2018 JIBC Foundation Anthony P. Pantages, QC Award at the Be the One Gala. The award is presented to an individual who has made a significant contribution in the field of justice to the benefit of British Columbians. Receiving the accolade is an honour for Storrow as he personally knew award namesake Anthony P. Pantages.

Be the One Gala Event Details

For almost 25 years, The Justice Institute of British Columbia Foundation (The JIBC Foundation) has been inspiring giving for important needs that enhance education, training, student learning and applied research at JIBC. These needs most often include student scholarships and bursaries, new equipment and technology, and other tools related to student success. The JIBC Foundation is proud to be building meaningful relationships with communities to support Canada’s leading public safety educator.

The JIBC Foundation Be the One Gala