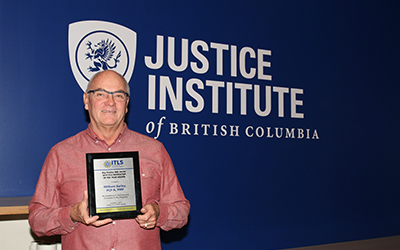 A longtime paramedicine instructor at the Justice Institute of British Columbia (JIBC) has been honoured by International Trauma Life Support (ITLS) for excellence in teaching and innovation in ITLS programs.

Bill Bailey was recently recognized as the 2017 Instructor of the Year by ITLS, a global, not-for-profit organization dedicated to preventing death and disability from trauma through education and emergency trauma care. The ITLS course is taught through 90 chapters in 40 countries around the world. For paramedics in BC, the ITLS program is taught as part of ongoing professional development following Primary Care Paramedic training.

“It’s an honour,” said Bailey, who teaches the ITLS course for JIBC as well as for BC Ambulance Service. “There’s thousands of instructors throughout the world. I’ve worked with a lot of these people, I’ve trained in many of the countries, and these are pretty phenomenal people I work with.”

The award recognizes in particular Bailey’s efforts to tailor the ITLS course to JIBC’s numerous contract clients, incorporating clients’ protocols, procedures and policies. That can range from setting training scenarios for corrections nurses in prison cells, to ensuring cultural differences are followed in Abu Dhabi.

“For more than 25 years, Bill Bailey has been a leader among instructors at the JIBC Paramedic Academy, and has shown his commitment to excellence in ITLS training since its introduction to the Institute,” said Kathy Harms, Director of JIBC’s Health Sciences Division. “He has exemplified JIBC’s commitment to fostering excellence in programming and delivery though his work with our diverse client groups, and this ITLS award is further evidence of that.”