JIBC staff, faculty and community give for student success 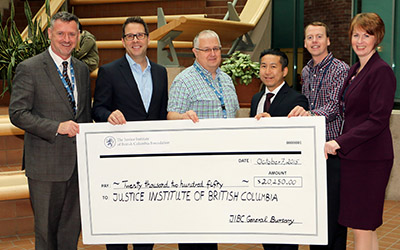 In June, The Justice Institute of British Columbia Foundation (The JIBC Foundation) launched a campaign to raise funds for JIBC’s General Student Bursary, which helps students in financial need pursue their dream of a career in justice and public safety.

The JIBC Foundation invited JIBC staff, faculty and corporate partners to support the campaign, and the JIBC community responded.

“The JIBC Foundation is committed to this campaign and is eager to support our future justice and public safety leaders through the General Student Bursary,” said Fryer. “We are proud to recognize the financial contributions of JIBC staff and faculty who generously participated in the campaign through our matching challenge.”

Scott Ostertag, JIBC Financial Aid Advisor said, “Working with students firsthand, I know that the funds raised will go a long way to help narrow the gap and alleviate the financial pressures many of our students face on a daily basis.”

For bursary recipients like Raymond Tam, the additional financial support has allowed him to continue his education.

“The bursary I received had a huge impact. It was essential to me in pursuing my dream of becoming a police officer,” he said.

The success of this campaign was rooted in the contributions of JIBC staff, faculty and corporate partners including Manulife, G&F Financial Group, Telus, Starbucks, Safeway and Tim Hortons, who believe in JIBC’s mission and have a desire to help students directly.

“Thank you to everyone who supported and contributed to the success of this year’s General Bursary fundraising campaign,” said Dr. Michel Tarko, President and CEO of JIBC. “Your support makes a lasting and positive impact on our students in financial need who are eager to make a difference in the community.”

Although the official matching challenge of the campaign is wrapping up, fundraising will continue to support the campaign throughout the year. To donate, please visit jibc.ca/donate.

Since 1993, The Justice Institute of British Columbia Foundation (The JIBC Foundation) has worked on behalf of JIBC to raise funds for scholarships and bursaries, applied research, equipment and other tools that impact student success. The Foundation is the recipient and manager of charitable donations and builds meaningful relationships with communities to support Canada’s leading public safety educator.