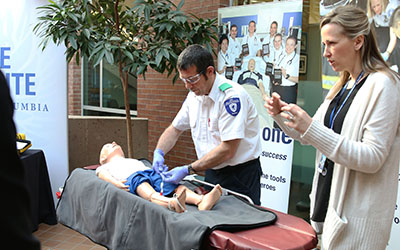 Advanced Care Paramedic student David Stanton and instructor Jodi Butterman demonstrate the use of new training equipment during a vist by representatives of the donors, the BC/Yukon Command of the Royal Canadian Legion Foundation.

Thanks to the Legion Foundation’s gift of $5,000, specialist kits have been purchased that will be used in Advanced Care Paramedic training in New Westminster, Victoria and Kelowna.  These paramedic students are learning how to use intraosseous infusion equipment – a key skill they will need in their pre-hospital careers. Intraosseous infusion enables fluids and medication to be directly injected into bone marrow and is used when intravenous access is not feasible.

The equipment can be used for both adults and children and enables fluids and medication to be administered quickly and effectively. The types of cases where this technique could be used include those involving cardiac arrests, respiratory failure and neurological patients. 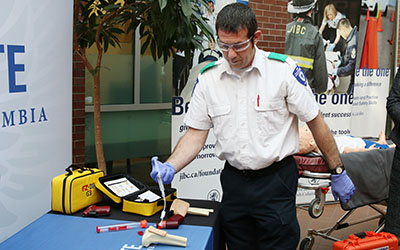 ACP student David Stanton demonstrates new equipment to train in the intraosseous infusion technique of administering medications and fluids directly into bone marrow when intravenous access is not possible.

“We greatly appreciate this gift from the Legion Foundation which directly improves student learning and their skills,” says Barb Kidd, Dean, School of Health, Community & Social Justice. “With a shared focus on supporting first responders, we look forward to collaborating with the Legion Foundation on future health initiatives.”

“If I didn’t have this equipment to train with, I would be at a loss in the real world,” said Advanced Care Paramedic (ACP) student, David Stanton, who demonstrated how the equipment is used during a visit by representatives from the Legion Foundation at JIBC’s New Westminster campus.

“The Royal Canadian Legion is proud to support The JIBC Foundation and our future paramedics. First responders are an extremely important part of our community, and we want to make sure they are getting the support they need and the training tools necessary,” said Sandy Reiser, Executive Director, Royal Canadian Legion BC/Yukon Command, part of the delegation that visited JIBC recently.

“We are grateful for the support of donors like the Legion Foundation who enable JIBC to deliver exceptional applied learning opportunities for our students,” said Tracy Campbell, Executive Director, The JIBC Foundation. “Thanks to their generous donation for these vital teaching tools, the Legion Foundation is equipping the next generation of paramedics with the skills to deliver the best care possible to their patients.” 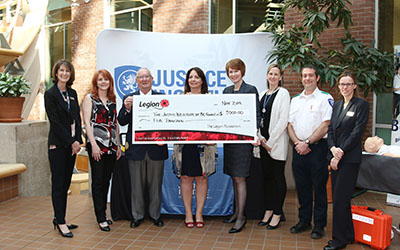 Calling all first responders - the Royal Canadian Legion BC/Yukon Command wants to know why younger veterans, current serving members and first responders are not joining the legion. Please join them for a focus group on May 6 from 1pm - 4pm at the Executive Suites Hotel & Conference Centre in Burnaby. Register at Legion Focus Group.

For more than 20 years, The Justice Institute of British Columbia Foundation (The JIBC Foundation) has inspired giving for important needs that enhance education, training, student learning and applied research at JIBC. These needs most often include student scholarships and bursaries, new equipment and technology, and other tools related to student success. As the recipient and steward of charitable gifts, The JIBC Foundation is building meaningful relationships with communities to support Canada’s leading public safety educator.

About the BC/Yukon Command of the Royal Canadian Legion Foundation

The Legion Foundation, established in 1997, is the giving arm of The Royal Canadian Legion BC/Yukon Command. It is generously supported by the Legion’s branches, Ladies’ Auxiliaries and local & regional Poppy funds, who tirelessly fundraise to support our giving objectives.  We support Veterans and their families, as well as health care initiatives, social services, low rental housing, youth and seniors’ sports, and educational programs which enhance the coming together of communities.