JIBC remembers former Board Chair for his commitment to public service 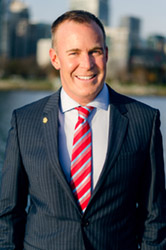 A memorial fund has been established at Justice Institute of British Columbia (JIBC) in honour of former Board of Governors’ Chair Doug Eastwood, QC, who passed away on April 22, 2018.

Doug served on JIBC’s Board for six years between 2011 and 2017, including three years as Chair, where he was instrumental in the development of the Institute’s new strategic direction and also the selection of a new President.

Doug had a distinguished career with the B.C. Ministry of Attorney General spanning 27 years and was appointed as Queen’s Counsel in 2013. He was active in the community, and JIBC was among those organizations which benefited significantly from his leadership, vision, and contributions.

The J. Douglas Eastwood, QC Memorial Fund was created in honour of Doug, in recognition of his service to JIBC and his many contributions to public service and the community. The fund will support students as they learn critical skills and knowledge at JIBC for their careers in justice and public safety.

Directing remembrance gifts to The Justice Institute of British Columbia Foundation was a natural fit for Doug’s family. His sister, Ellen Eastwood, said, “Doug was passionate about public service and loved working with JIBC.”

A celebration of Doug's life will take place on Friday, May 4 at 4 p.m. at The Law Courts Inn Restaurant, 800 Smithe Street, 4th Floor, Vancouver.

Anyone wishing to make a donation in memory of Doug can do so at J. Douglas Eastwood, QC Memorial Fund.

For almost 25 years, The Justice Institute of British Columbia Foundation (The JIBC Foundation) has inspired giving for important needs that enhance education, training, student learning and applied research at JIBC. These needs most often include student awards and bursaries, new equipment and technology, and other tools related to student success. As the recipient and steward of charitable gifts, The JIBC Foundation is building meaningful relationships with communities to support Canada’s leading public safety educator.