Rick Mercer: Paramedic for a day

On September 9, 2013, our Kelowna campus hosted a notable and enthusiastic Canadian visitor:  the one, the only Rick Mercer and his team from CBC Television's The Rick Mercer Report.

While filming took place, the rest of JIBC was sworn to secrecy until the show aired on October 15. 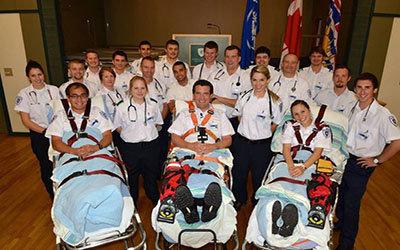 The spontaneous invitation came from the Primary Care Paramedic program staff who asked the fun-loving Canadian television host to be a paramedic student for a day.  Luckily, it fit within Rick's schedule to drop by JIBC's Okanagan campus in Kelowna.

Following a meeting with JIBC President Michel Tarko and Paramedic Academy staff, Rick donned a student uniform for a day full of shenanigans that included driving an ambulance while students tried to perform procedures in the back.  He inhaled nitrous oxide, or laughing gas - not that he needs the stuff. And, while being wheeled around on a stretcher, he realized that in the future, even if he's unable to walk, he might still be able to pull off his interviews lying down.

He also enjoyed some banter with one female paramedic student, marvelling at her intrinsic energy. Take a look at some of the pictures Rick posted from the day on the Rick Mercer Report's Facebook page.

You can learn more about becoming a real paramedic by visiting our Paramedic Academy. Training is available in New Westminster, Victoria, Chilliwack, Kelowna, and Prince George.